In the 1960s many people came from Kashmir to Bradford to work in the then-thriving textile industry.  It was a time when halal products were non-existent in the shops here in the UK. Mohammed Saleem was one of these young men far away from home living in a place where it had become a struggle to eat or obtain halal foods. 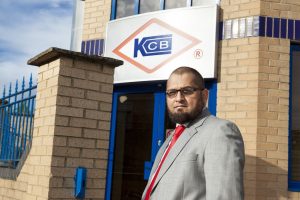 He began to feel the anguish not only for himself but for his fellow countrymen who could not buy or eat halal product foods. It was Mohammed Saleem’s initiative to serve others that became the beginning of what later became Kashmir Crown Bakeries.

The ethos to provide the community with products suiting their cultural and religious values has remained an important factor in KCB to this day. Holding to its values KCB has kept its presence in the marketplace for over 50 years now. KCB has established itself in the UK and further expanded into Europe and North America. KCB has become well known over its signature product ‘the KCB Cake Rusk’.